from farm to table

Hello, We are Scott's Table

Scott's Table is all about quality, fresh ingredients being respected and handled carefully.  The choice to bring produce and proteins in from local North Carolina sources ensures that they will be at the peak of their taste profiles.  Produce that can ripen on the plant and be picked only when it is ready will always taste better than produce that must travel across the country or the world to reach us.  It is with this ideal in mind...

Let us prepare you our special sweet

Scott's Table is all about quality, fresh ingredients being respected and handled carefully.  The choice to bring produce and proteins in from local North Carolina sources ensures that they will be at the peak of their taste profiles.  Produce that can ripen on the plant and be picked only when it is ready will always taste better than produce that must travel across the country or the world to reach us.  It is with this ideal in mind that the groundwork for Scott’s Table began.  Our dishes have been carefully created by Chef Scott and executed by his skilled team of professionals.  Our pride shows in every plate we create.

Our dedication and commitment to using the best of ingredients carries over into our dining rooms - in the way we take care of each and every guest that comes to Scott’s Table.  Our staff is here, not only to serve you, but also to tell the stories of the dishes we serve.  Pull up a chair and make yourself comfortable.  We are glad you are here.

There is always room at Scott’s Table.

Scott’s Table has been a dream since Scott first decided that he wanted to work in the restaurant industry.  Over years of training and working in the industry,  Scott developed his dream and nurtured the idea of what his restaurant would become.  With the help and support of his wife and family, that dream has become a reality.

Chef Scott was born in Boston, Massachusetts in 1969.  His family soon relocated to Davis, California where he spent his early childhood.  When Chef Scott was approximately 11, he moved to Spotsylvania, Virginia.  His mother always included him when she would cook even before he could see over the stove.

He got his first job working in the restaurant business at 15 when he went to work at The Olde Mudd Tavern in Thornburg, Virginia.  The owner and chef saw his potential and gave him his first set of professional knives and encouraged him to continue in the business.

When Chef Scott went to college, he tried to go with a more traditional career choice, but he just didn’t find the joy he found when he was creating a dish.  It was during this time that he found, Karen, his future wife.  She encouraged him to follow his passion and go to culinary school.  His father was also encouraging him to get a degree.  So, after Chef Scott married Karen, they moved to New York for him to attend The Culinary Institute of America C.I.A in Hyde Park.  He graduated at the top of his class and was the group leader that included Iron Chef Cat Cora, Chef Linton Hopkins, and Chef Scott Boswell.  Scott also had the rare opportunity to perform a demonstration for students with Julia Child.  While at the C.I.A he also worked at the Sand’s Hotel and Casino in Atlantic City, where he cooked for people like: Cher, Frank Sinatra, Steve Martin, Meryl Streep, Paul Newman, Chef Paul Bocuse, and George Duboeuf.

Upon graduation, Chef Scott and Karen moved south to escape the cold winters of the north and ended up in Myrtle Beach, South Carolina, where he helped to open a restaurant as the executive chef.  Unfortunately, the building was sold and the restaurant was forced to close after a year.  Chef Scott found a position with Francis Marion University as their first executive chef.  This created a new direction for his career and an opportunity for a family with Karen.  Chef Scott went on to work at McLeod Regional Medical Center for approximately 3 years.

His wife, Karen, had a career opportunity with a move to North Carolina.  So Chef Scott picked up again and ended up at Penick Village as their executive chef.  He thoroughly enjoyed his eleven years there.  However, he never gave up his desire to own his own restaurant.  After much prodding and praying. Chef Scott and Karen decided that now was the time.

And so Scott’s Table was born.

From Rt 1 heading South from Raleigh/Sanford:

No matter how you get here, Welcome to Scott's Table !

Catering for your special events

A Selection of Our photos 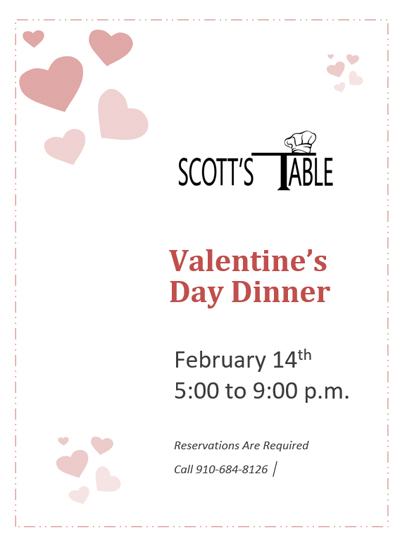